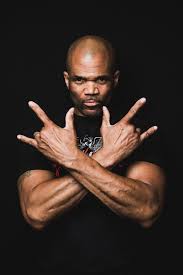 Darryl McDaniels or “DMC” as most of the world knows him, first made his start in the music business as one third of the groundbreaking rap group Run-DMC and quickly became the most popular in terms of fans and influence. He has been in the public eye for the past 20 years, since forming the now legendary, defunct group, RUN-D.M.C with Joseph (Rev. Run) Simmons and the late, great Jason (Jam Master Jay) Mizell. Also one of the founding members of this multi-platinum music group, selling over 30 million singles and albums worldwide, it would be hard to overstate his influence on popular culture. He helped transform Rap and Hip Hop into the most popular music in the world, while building a fan base that rivals the biggest acts in Rock ‘n’ Roll. As the first and greatest of Hip Hop’s superstars, Run-DMC succeeded beyond anyone’s wildest dreams – their own included – by embodying for the world endlessly creative subculture of young black New York. They were the first rappers to earn a gold album, the first to earn a platinum album, the first to go multi-platinum, the first to have their videos played on MTV, the first to appear on American Bandstand and Saturday Night Live, and the first rap band to grace the cover of Rolling Stone and Spin.