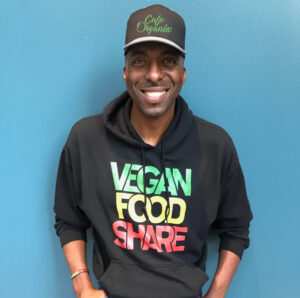 John Salley is a retired 15-year NBA veteran and was the first NBA player to win four championships with three different teams. Salley is owner of a new vegan restaurant, Cafe Organix. After his retirement from the NBA in 2000, Salley explored several opportunities in both television and film.John is also the head of his own production company. John is actively involved with Operation Smile, PETA and the fight against Diabetes. In addition, John is involved with PCRM and visited Washington in Nov ’09 and May ’10, speaking to Congress about the Child Nutrition Act, asking Members to support legislation that would increase vegetarian options in meals served in public schools.

John has adopted a plant based (raw vegan) lifestyle, and is a frequent speaker at VegFest’s across the USA. As a Wellness Advocate, one of John’s main missions in life is to continue to educate people on the benefits of living a healthier lifestyle though better eating habits. Salley is the definition of father, athlete, actor, entrepreneur, talk show host, philanthropist, wellness advocate, vegan and champion. John Salley Website